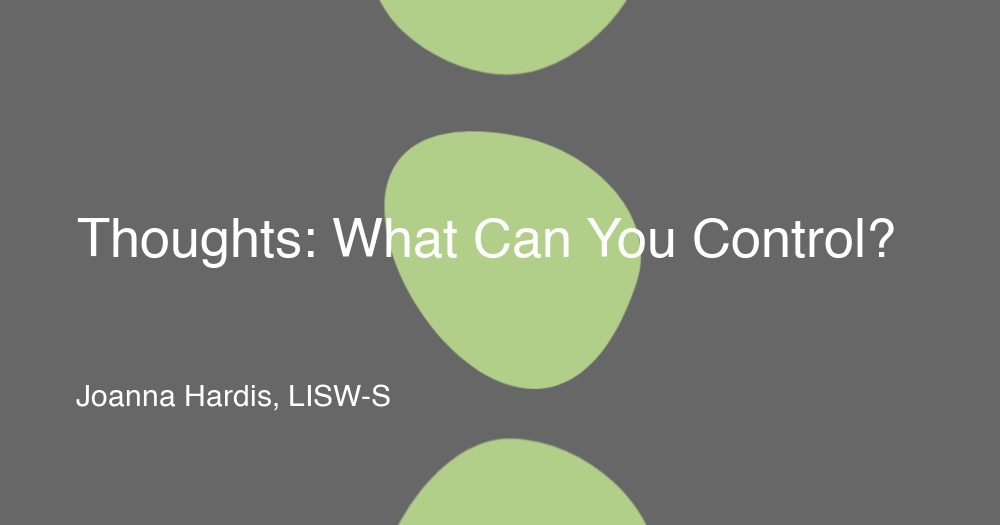 Wouldn’t it be nice if we could control our worries? Sometimes. But all is not lost. Worry is a temporary feeling just like joy or anger, and it, too, serves a purpose. While we can’t control the initial thoughts that may have evoked the worry, we can control how we respond to the thoughts.

The key is to understand the different types of thoughts. I was recently thinking about this at the Annual OCD Conference in Austin, as a colleague and I discussed the subtle differences between worry, rumination, intrusive thoughts, and obsessions. For most people, the slight differences between these may be irrelevant, but, for therapists and people experiencing them, knowing and understanding their nuances can be quite helpful — especially when we think about how to respond to them.

Let’s start with something we all experience: worry. Worry isn’t all bad (which is why we don’t want to stop it completely). Some worry is helpful and will lead to problem-solving. Once the problem is solved, the worry is gone. Then there’s excessive worry that’s characterized by the endless “what ifs” and is generally future focused (on the worst-case scenario) and underestimates the person’s ability to manage. That’s the worry that fertilizes anxiety.

Often people don’t realize (or they forget) that this worry is a voluntary thought process.

Whaaaaat? Seriously. It is.

It may not FEEL like it’s voluntary, because the initial thought may just pop up out of nowhere, but we have the choice whether or not to engage in the cycle that maintains the process. We have a choice to give in to it or not.

The difference between worry and rumination is that worry tends to focus on the future, while rumination focuses on the past. It’s also the hallmark thought process of depression.

When someone goes over and over something in their mind, it’s a voluntary process (even though it may not feel like it). I may ruminate about a conversation I had with my daughter last night where I snapped out of frustration and said things I now regret. Instead of talking with her about it directly, I may go over the conversation over and over in my head replaying it. In this, I’m putting my attention and energy on something I cannot control (how I think and feel) instead of something I can control (whether or not I talk with my daughter).

What are intrusive thoughts?

Having intrusive thoughts is normal. It’s just that: a thought that intrudes upon our conscious.

I’m not embarrassed to use myself as an example … I recently got a new car, and, as part of the safety features, it makes all sorts of noises, and red lights go off in the backup camera when I’m in reverse.

I hate it. I cannot figure out how to disengage it.

More than once, I’ve had the intrusive thought that I’ve run over someone or something like my neighbor’s cat, and I had the urge to check or ask whoever is with me for reassurance to make sure I didn’t. Some days are harder, like when there are sticks or acorns on the driveway, and I have to work harder to trust that I didn’t run over anyone.

Do the thoughts pop up? Yes.

Do I enjoy them? No. But I don’t fight them. I allow them to be there.

Do they mean anything other than I have intrusive thoughts? No.

Among the factors (there are many) that differentiates someone who develops OCD is how that person responds to the intrusive thought. Someone who may develop OCD is going to respond to the intrusive thought, or obsession, with intense fear, worry, anxiety, panic, wonder why they’re having the thought, what this means about them, and use their intense feelings as drivers for their actions.

I think the most misunderstood of the bunch is obsession. In the context of Obsessive Compulsive Disorder, an obsession is an involuntary thought that is both intrusive and distressing. I might add the word sticky to the mix, since the person has a hard time disengaging from it. It sticks to them.

Certainly, people use the word “obsession” in casual ways, but again, I’m referring to its clinical meaning with OCD. So, for example, saying “I’m so obsessed with my dog” wouldn’t fit our definition. But repeatedly having a thought about brutally killing my dog? Now that’s it! It’s intrusive, distressing, and sticky. People can have obsessions about anything really. The only limits come from their imagination.

Someone who might develop OCD also develops rituals — sometimes people can see these rituals (e.g., washing hands) and sometimes they happen only in the sufferer’s head — to relieve the anxiety generated by the obsession. If there’s enough impairment, if it gets in the way of living successfully, it may develop into a disorder (the D in OCD).

Which thoughts are normal?

All of these thought processes are normal. We all experience them, and they exist on a continuum of intensity, frequency, duration, and impairment.

The key is in our response.

If we automatically respond to thoughts as if they are threats, facts, meaningful and/or “something to be figured out,” they will stick around and most likely strengthen. Truly our life’s work is to be present and slowed down enough that you can choose how you want to respond. And we’re not looking for perfection. I mean I’d have to give up caffeine and meditate much more than I do to even come close to controlling my responses with such intention even half the time. It’s about celebrating when we are able to do it. As long as we’re moving forward, we’re doing well. It’s progress, not perfection.

There are evidence-based treatments, like Cognitive Behavior Therapy (CBT), Exposure and Response Prevention (ERP), and Acceptance and Commitment Therapy (ACT) to guide us. For many, finding a therapist trained in them (like me) can make all the difference.