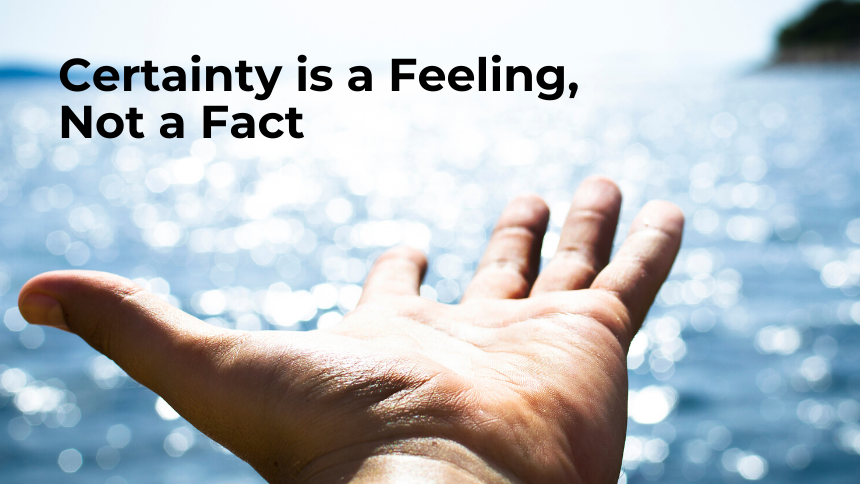 “Certainty is a feeling, not a fact” is a well-known phrase among OCD and anxiety therapists, but it bears spending some time unpacking. Anyone who reads my stuff regularly knows that worry and anxiety feed off of uncertainty and discomfort. Here’s the nuance I want to explore: uncertainty and discomfort are feelings just like happy, mad, and scared.

We’re going to run into unknowns often in life. For example, you might be looking for health insurance but aren’t quite sure which one is best for you. That can be problem solved. That’s when looking at pros and cons, comparing different plans, and asking an expert is helpful and productive.

What can get people into a spiral are thoughts like “why can’t I find a job that offers insurance,” “I’ll never figure this out,” “what if I can’t afford the insurance, “what if the deductible is ridiculously high” … What if? What if? What if? You get my drift.

These are likely to evoke anxiety, because there’s so much inherent uncertainty. It’s when you get lost in never-ending questions and looping thoughts that you need to pull back, acknowledge that you’re feeling uncomfortable, and ride it out. With worries, there’s no “perfect” (i.e., certain) answer even though your brain may tell you that with enough work, you can find one. The more you feed these kinds of thoughts (looking for relief), the bigger they are going to get (and the worse your worries and anxiety will be). It’s a paradoxical effect.

It’s worse when there’s an area to which someone is particularly sensitive be it dating, their health, safety, whatever. It’s as if the need to know becomes a craving, a drug they need to have. The problem is this: in life, there’s nothing we can be 100% certain about except death and change (and taxes). Most of us never think about this reality and accept being “sure enough” or go through life feeling sure about the probability of things working out versus hedging our bets on the slim possibilities. But for those who are anxious or who suffer with OCD, this process is incredibly difficult.

For example, someone with an anxiety sensitivity to their health gets a stomach bug. They call their doctor who tells them that is sounds like norovirus, and it will ride itself out. This person starts worrying about the doctor’s choice of words: why did they say, “sounds like?” Could it be something else? What happens if it’s not norovirus? What else could it be? What’s the next step?

The more they worry — which is a reaction to feeling uncertain — the sicker they feel. To try and find some relief, they then turn to “Dr. Google” for information, which (always) makes things worse and to their friends for reassurance which may not help (it’s called unproductive reassurance). They’re searching for a guarantee that they’ll be OK when none exists (though it’s highly likely that everything will be ok), and, in the process, making themselves more worried, more anxious, and more miserable.

I know, I’ve been there.

There are skills that help.

The goal is to lean into the feelings versus avoid or try and make them go away. The more we try to avoid them, the stronger they get. The good news is that feelings are temporary, and they’ll pass. The more we practice not engaging with them, the smaller and less intense they will be. The bad news is that they will come back in waves — some smaller, some bigger. It’s always the same process though, and when we’re willing to face the discomfort, our anxiety becomes less disruptive. Since we’re building a new pathway in the brain, it requires repetition to get stronger. The more you’re willing to practice, the stronger the association becomes.