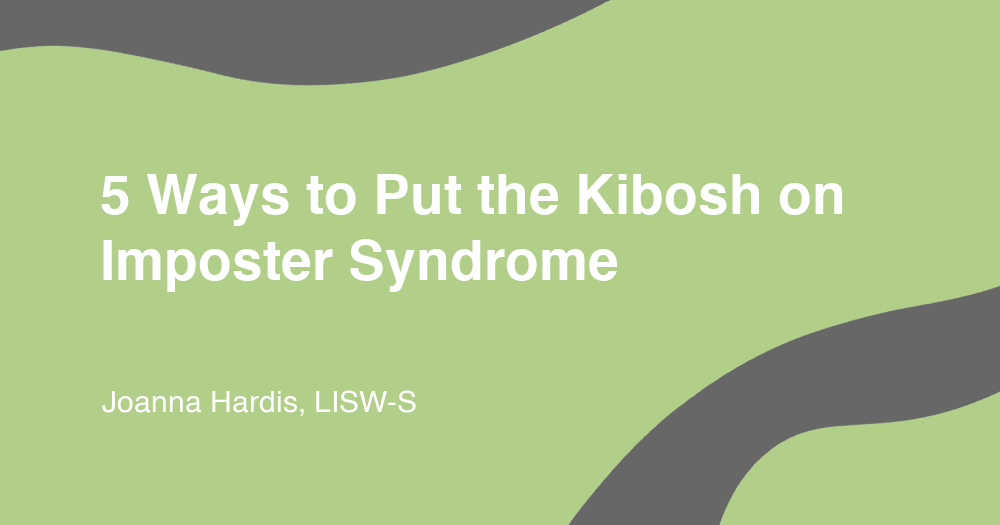 I was recently a guest on The Coach’s Podcast, and I was asked if I ever felt doubt in my abilities.

It’s called imposter syndrome (or, as psychologists call it, imposter phenomenon).It’s not about what’s real. It’s about how we feel about ourselves.

About 70% of people feel imposter syndrome at some point in their lives. Talk about not being alone!

You know who doesn’t doubt herself? Julia Louis-Dreyfus on Veep. Forgive the tangent, but it’s one of my favorite shows. Apart from the brilliant writing and amazing cast, it has the ability to turn my mood around instantly. Anyway … Julia’s character, Selena, is the vice president and, for a brief instance the POTUS. She’s utterly terrible at both roles. AND SHE NEVER QUESTIONS IT. Never questions her place in those roles. Never questions her abilities. She’s like the antithesis of someone with imposter syndrome.

Annnnd it’s a comedy. I get this, but nonetheless, thinking of someone or something fun can lighten up our mood and just maybe help us get out of our own way a bit.

What is Imposter Syndrome?

First described by psychologists Suzanne Imes, PhD, and Pauline Rose Clance, PhD, in the 1970s, impostor phenomenon occurs among high achievers who are unable to internalize and accept their success. They often attribute their accomplishments to luck rather than to ability, and fear that others will eventually unmask them as a fraud.

Though the impostor phenomenon isn’t an official diagnosis listed in the DSM, psychologists and others acknowledge that it is a very real and specific form of intellectual self-doubt. Impostor feelings are generally accompanied by anxiety and, often, depression.

Ah-ha! It’s as I suspected. Imposter syndrome reeks of the fear of uncertainty.

With imposter syndrome, there’s a lack of feeling certain that you’ve succeeded, are qualified, or are enough. (It’s no wonder so-called perfectionists and experts often report feeling this way.)

This excess worry produces anxious feelings. We don’t like these feelings, so we try to get rid of them. If you find yourself seeking reassurance, over-preparing for things (and I mean way over), ruminating about what was said and whether “it was the right thing” and how people responded, checking and checking your work, you’re probably trying to get rid of feelings. You know what happens when we try to get rid of feelings? They get stronger. So, the first thing we need to do when working through imposter syndrome, is …

These are my 5 ways of working through imposter syndrome. What are some of yours? Hop over to my Instagram page and share!

Check out the full conversation I had on the Coach’s Circle Podcast. We talked about anxiety and OCD, including the impact COVID is having. Life Coach Path is a new online source for people looking to enter coaching. They offer information about certification, starting a business, coaching techniques, and more.