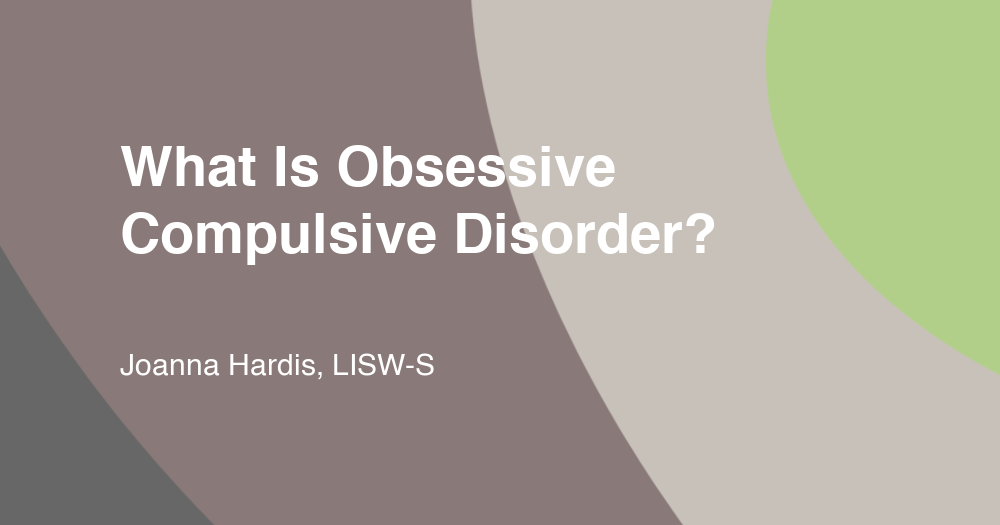 I have to then take some deep breaths. As a therapist whose practice is focused on helping those with this mental illness, hearing OCD used as an adjective makes me want to scream. It also makes me realize just how misunderstood it is.

Before I continue, I have to give this disclaimer: this article is meant to bring awareness and start the education process. It’s not a substitute for a diagnosis. If you think you might truly have obsessive compulsive disorder, please contact a therapist licensed and trained to help. If you’re in Ohio, let’s connect.)

Obsessive compulsive disorder, or OCD, is a mental illness, and one that can truly disrupt someone’s life.

The American Psychiatric Association publishes the Diagnostic and Statistical Manual of Mental Disorders, or DSM-V. Without getting into the nitty gritty, just know that this book lists the criteria to help licensed therapists in diagnosing OCD.

Keep in mind, however, that OCD is a spectrum illness, so, just because you don’t meet the criteria for the D, doesn’t mean you’re not suffering or in need of help. There are lots of people who have what’s called “sub-threshold OCD” who struggle and whose lives are greatly impacted. They just don’t meet the DSM’s criteria for number of symptoms or frequency of symptoms or duration or level of impairment.

An Example of the OCD Experience.

Have you ever left the house and then wondered if you locked your door or turned something off? Most of us can relate to this, I think. You don’t want your home broken into. In the rush to get the kids out or to make it to some place on time, you just can’t remember. If you don’t have OCD, you’ll likely go on with your day and not give it much more thought. Without thinking about it, you’re being “sure enough” that you did it.

For someone with OCD, this experience is different.

For them, it’s not just about confirming in their mind if they locked the door. It’s drowning or spiraling down with thoughts of someone breaking into their house, stealing all of their stuff (including their identity), and potentially harming others. The thought is so distressing that they’ve checked the lock 5, 6, 7+ times. They’ll listen for clicks or jiggles to sound right, tap into the feel of the door as it’s closing and the lock as it’s locking. They may perform this ritual repeatedly. They may replace this scene in their head over and over again, making sure they’ve locked it. They may call someone to reassure them.

Despite all their efforts, they remain distressed or preoccupied — all day — by the possibility of someone breaking in. It prevents them from being productive. They’re unable to focus on anything else. It gets in the way of living day-to-day life.

This is just one example. There are dozens of other ones, and while there are certainly similarities, each person’s experience is their own.

My point is that it’s not simply worrying or having a preference. So, when someone says, “I’m so OCD about [insert preference],” inadvertently, they’re invalidating the true OCD experience.

Choose the appropriate adjective instead of referencing a mental illness.

And if you do actually suspect you may be on the OCD spectrum, please seek out a trained therapist for an actual diagnosis. You can find them and a lot of great information about OCD at the International OCD Foundation’s website.