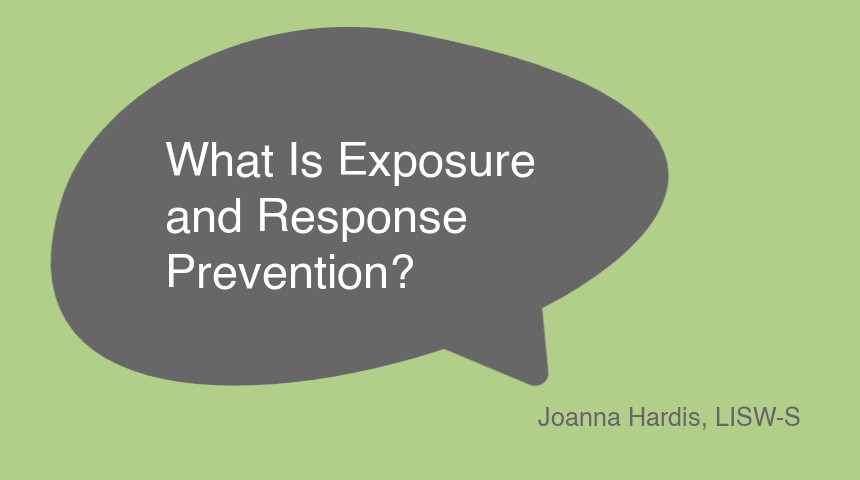 ERP stands for Exposure and Response (or Ritual) Prevention. For those with obsessive compulsive disorder (OCD), ERP along with medication, lifestyle changes and other factors, can give them back their lives.

ERP is considered the gold-standard of OCD treatment. According to the International OCD Foundation, research shows that about 70% of people with OCD will benefit from ERP and/or medication. This is great news — especially if you’re feeling despair.

To understand why ERP makes sense, you first need to understand obsessive compulsive disorder. In its most simplistic terms, it’s facing your fears.

There’s more to it, of course, so let’s dive in. Before I go any further, I want to stress that this article isn’t meant to be directions. I want to give you the basics so that you better understand what will happen when you work with a trained and licensed professional.

What is Exposure and Response Prevention All About?

The “exposure” involves is intentionally facing the very situations that evoke the intrusive thoughts and anxious feelings. These can be in-vivo (in the situation in real life) or imaginal exposures. When we can’t be in the situation, we’ll pretend by using graphic scripts of the situation. The person with OCD writes the script in concert with their therapist.

The “ritual (or response)” prevention is the important piece, because you’re intentionally doing this with the goal of not engaging in any rituals to bring the anxiety down.

Up until now, the person’s OCD has been telling them the only way they’re staying “safe” is by engaging in rituals. With ERP, we call their OCD out. We call its bluff by performing experiments called exposures to see what actually happens when they don’t engage in rituals.

Is it as terrible as their OCD would have them believe? Can they handle more than they think? Does the intensity of the feeling last as long as they thought?

Their amygdala has been sending danger signs around this situation. We work to retrain it with new learning — and the only way to get new learning is to hang out in the situation (over and over again) and create a new association. We train the brain that discomfort isn’t dangerous, feelings aren’t facts, I can handle anything my OCD tells me, etc.

It’s done in a systematic, gradual way. The client writes down what they’ve learned, how it compared to their expectations and what their OCD still needs to learn.

Through this process, clients learn so much. ERP can build confidence in their ability to tolerate whatever comes up without needing to make the feeling or thought go away. It can help them learn to trust that they can carry on with distress, because the distress will come down eventually. The feeling’s intensity doesn’t last forever. And ultimately, they learn that what their OCD tells them may not happen in the catastrophic way it’s been telling them (or at all…so far).

Why I Love Exposure and Response Prevention for OCD.

ERP is more than a treatment model. It’s a way of being in the world. It’s this idea that the faster you approach what you’ve been avoiding, the better at approaching it you’ll be. You’ll spend less time engaging with your thoughts and feelings and more time doing and being. ERP teaches that you don’t need to solve or understand everything. You learn to be sure enough.

At the end of the day, for both OCD and anxiety disorders, it’s never about “the thing.” It’s always about how you’re relating to it.

I talk more about ERP here.

As always, please connect with me if you want to know more.