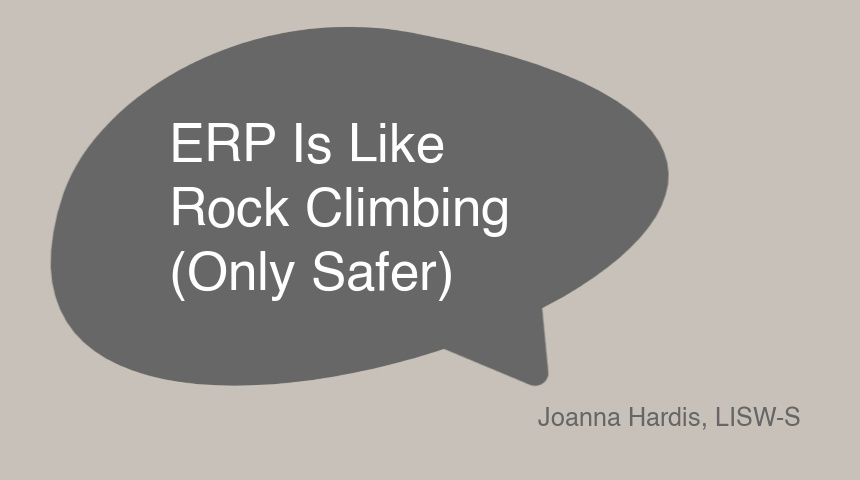 If you haven’t seen the documentary Free Solo, I highly recommend it.

It follows Alex Honnold, a professional rock climber, and his journey to free solo Yosemite National Park’s El Capitan. To free solo means you climb without ropes or harnesses, nothing. If he lets go, he falls. The film is riveting.

What I find most interesting is his process. He has an intense process that leads up to his climbs. Just like we have a process in Exposure and Response Prevention (ERP), as we lead up to more difficult exposures.

He follows his process (which includes finger pull-ups, by the way) before, during and after the climbs. We, too, have a plan that involves preparation, work in between sessions and ways to keep progressing.

For instance, he talks about mindset. He can’t dwell on the possibility that he could slip and fall, and possibly die. The same is true with ERP. We can’t focus on the remote possibility that something could happen. Safety is relative, and that he can maintain the mindset

He practices, practices, practices. And then he practices. He logged hours practicing climbing on El Capitan, especially the spots he found trickiest. He talks about “rehearsing” where he may imagine where he’s going to put his hands and feet. In this process, he’s anticipating what can happen and how he might respond. He does this to “broaden his comfort zone.”

We do this in ERP. We work through a difficult exposure, breaking it down into easier steps. We practice over and over until we’re able to respond differently in the situation. Like Alex does, we may also use imaginal scripts to confront our fears and prevent ritualization.

Talk about someone who embodies this! One of the things that’s so fascinating about Alex, and many climbers, is how objectively they speak about the risks of dying.

In Free Solo, he never sugar-coated the possibility that he could fall off at any moment. (You could feel the tension in the film crew as they watched him. One refused to watch.) He accepted it fully in the moment. It’s mindfulness in action. In ERP, risks feel real, but often they’re not. It’s a practice of learning to be safe enough and sure enough — and rolling the dice.

Such simple and wonderful ideas, aren’t these? But anyone who’s tried them knows they are certainly not easy. Even though the climber climbs alone, he has a team behind him. He has a support community, from trainers for his body to practitioners for his mind.

Obviously, most of us won’t ever accomplish anything close to free soloing El Capitan, but we can move forward in ways that are meaningful. And as he says, “As long as I’m getting better, it’s all good.”

And he practices, refines, adjusts. Just like we do.