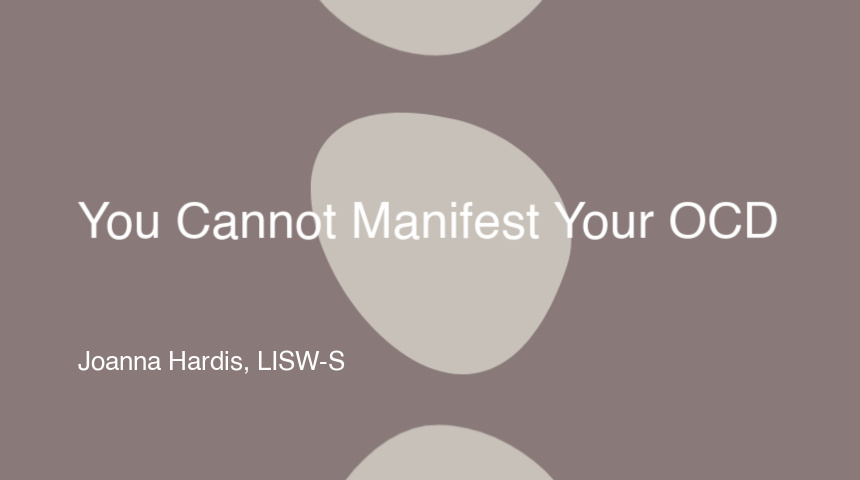 Something clients ask me a lot is if they’re going to manifest their intrusive thoughts by thinking them.

It’s generally after they’ve Googled something and stumbled upon the law of attraction or manifestation. (Gotta love SEO!)

While the law of attraction may empower some people, for those with obsessive compulsive disorder, it can actually cause confusion at best and harm at worst.

What is manifesting? What is the law of attraction?

According to verywellmind.com, the law of attraction philosophy suggests that “positive thoughts bring positive results into a person’s life, while negative thoughts bring negative outcomes.” It says our thoughts are energy, and like energy attracts like energy. Manifesting is the same idea. Lots of anecdotal stories, movies and books ($$$$$$$$) have been made on the topic, and they can be quite compelling.

If it works for you, great! I’m jealous. I tried and didn’t have much luck.

To understand why these philosophies are troublesome for someone with OCD, let’s look at 3 main ideas.

The law of attraction is based on the notion that you can think something into being. OCD is fertilized by the notion of thought-action fusion. If I think something, it’s either equivalent to doing it, or it makes it more likely I’ll do it.

You can see why law of attraction may be terrifying for someone struggling with intrusive thoughts. Their thoughts terrify them — so much so that they engage in rituals to prevent those thoughts from becoming a reality. This is the OCD cycle that we help people break out of.

It’s the antithesis of the law of attraction.

With the law of attraction and manifesting, you generally want the thoughts; whereas, in OCD, the thoughts are distressing.

In law of attraction, you’re trying to communicate with the universe that you want a successful career. You’re visualizing yourself in that career, probably saying speaking as if you have the success, and your intent is moving toward success. Those thoughts excite you. With OCD, the thoughts are what we call ego-dystonic (in manifestation, they are ego-syntonic), which means you don’t want them, they are not aligned with how you see yourself, and there’s fear that accompany them. Like most OCD thoughts, they may arrive with a sense of urgency — you must figure this out NOW to get rid of the thoughts and feelings. This is different from the first example where thoughts are just thoughts. How to approach them, therefore, will be very different. Your intent here is to disengage from them. Allow them to be there (this will not manifest them!), but not treat them as anything other than a thought.

People with OCD can be more vulnerable to superstitious or magical thinking.

We know from years of study that magical thinking can be part of OCD. Someone who is sensitive to this kind of thinking is more vulnerable to message of law of attraction. It’s easier to get tangled up in it, especially when the thoughts target how you see yourself as a person. OCD targets that which we value, which is why harm, religion, morality, sexual orientation and sexually intrusive thoughts (among many others) can be so distressing. This is where the magical and superstitious rituals can come in.

For example … If I step with my left foot before my right foot, something could happen to my child. If I don’t neutralize a “bad” word with a “good” one, the thought has a higher likelihood of coming true. If I fall asleep on an odd number, I may not wake up.

I just want to urge those with obsessive compulsive disorder to stick with the evidence-based treatments out there, like exposure and response prevention. If you’re seeing a therapist and don’t know if they’re a specialist in OCD, please ask! Treating OCD requires specialized training, and, if your therapist hasn’t had the requisite training, they may not be up to date in how to treat OCD. Just like your general doctor would not be the best choice to do your hip replacement, a general therapist may not be the best choice to treat your OCD.

If you’re in Ohio and want to talk more, please connect with me. Otherwise, find someone in your area.