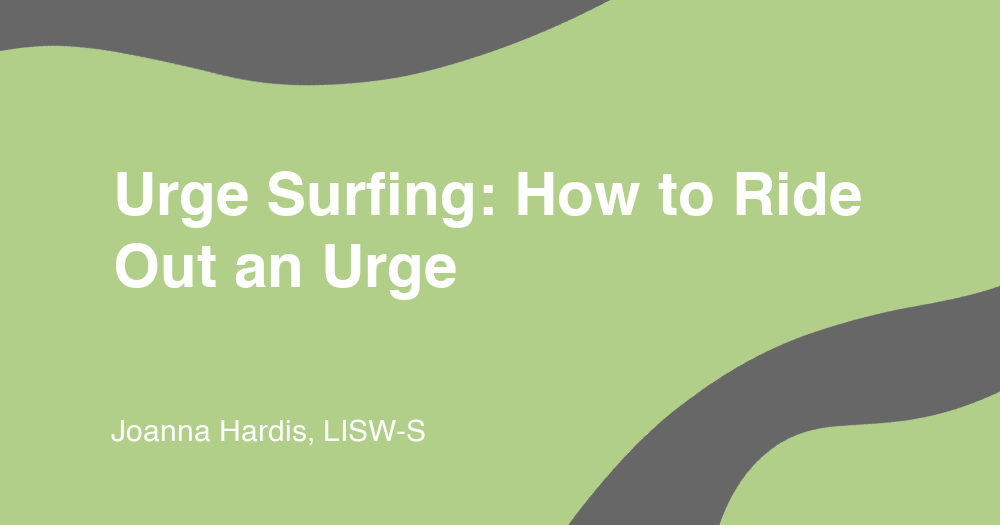 Let’s break it down a bit to see how it works.

First, let’s define what an “urge” is. According to the Bay Area CBT Center,

An urge occurs right before a behavior and is experienced as an intense physical and emotional experience. Urges get triggered by an event, a thought, feeling, memory, or image and pull us towards automatic ways of responding. Urges can feel like waves, they rise in intensity and tug and pull us towards using old behaviors that may provide us a temporary relief, but often lead to negative consequences in the long run.

How Long Does an Urge Last?

Ultimately an urge is just a feeling. It’s a feeling that we must do something. Dr. Jill Bolte Taylor, a Harvard-trained brain scientist, says a feeling, left unattended lasts about 90 seconds.

They can last longer, however, when we attach to them or try and fight them. Just like I’m always saying about those uncomfortable anxious thoughts and feelings — what we resist persists!

When you’re swimming against it, it sounds like this:

“This is never going to end!”

“I can’t take this feeling!”

“This time it feels different.”

“Why is this happening?”

The problem is when you engage with an urge like this, you reinforce the process in your brain. The negative reinforcement loop:

You gain short-term comfort at the expense of longer-term freedom.

We want to learn how to ride it out.

How to Surf an Urge

If you catch yourself thinking these things, stop and pause. What action do you want to take right now that feels like you HAVE to take? Are you caught up in an urge?

A helpful tool is delaying. Set a timer for 2-minute intervals, and for those 2 minutes, fully commit to doing something else. When the timer goes off, either reset it and repeat until the urge passes, or if it’s passed, keep focusing on the new activity you’re doing.

If you want longer intervals, go for it!

A key point here is that we have to be willing to allow whatever shows up to be there without resisting it.

While anything can trigger an urge, usually we can recognize patterns for ourselves. Mindful awareness can be super helpful in learning more about ourselves.

One more thing before I go. Make sure you approach this new practice with patience and self-compassion. Like learning any new skill, you may feel awkward at first. If you stick with it, though, it’ll get easier.

And remember, progress is not linear. Giving into an urge is not failure; it means you’re human. The important lesson is to get back on your mental path and move forward.