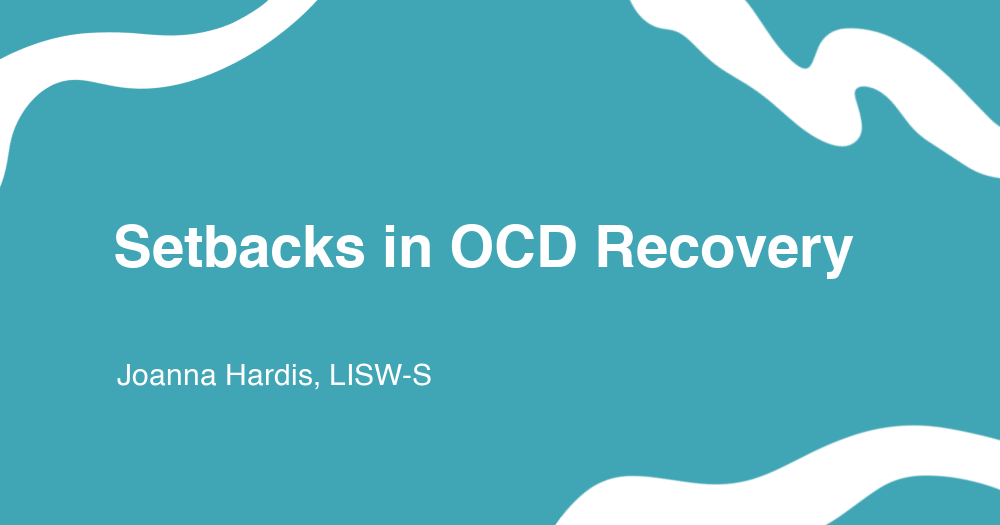 Has someone ever told you, “you’ll have to live with your OCD forever?”

It’s one of my pet peeves. First of all, it’s not true. Second of all, it doesn’t really make sense and third, I feel that sentiment exudes hopelessness when, in fact, recovery is a process.

When we learn any new skill, we often take 2 steps forward a 1 step back.

That being said, not every step back is a setback. Let’s look at an example.

Someone’s been working on not asking for reassurance for some health-related concerns. They’ve also been working on not mentally scanning or checking their own internal experience for changes in how they’re feeling. They’ve been able to go 5 days without engaging in behaviors. On day 6, they note they’re less anxious most of the day. That evening, their child gets sick, so they don’t sleep as well. On day 7, they notice they wake up feeling anxious and interpret it as a setback. After all, they hadn’t woken up anxious for the past week.

Is it an OCD setback? That depends.

The presence of anxiety or thoughts or urges, in and of themselves, is not a setback. How they choose to react and respond to their internal experience is what’s important.

asking for reassurance that they won’t get sick

scanning their own body for symptoms

taking their temperature before symptoms appear

being vigilant for symptoms

comparing how they feel today versus the other days

… then, it’s possible heading toward a setback.

Are they focusing all their time and attention on their internal experience?

Are they focused on controlling or getting rid of their anxiety instead of allowing it?

And even if they notice they’ve engaged way too much but then pull themselves out, I consider that progress. If they can “get back on the horse” and not spiral into giving into their thoughts, chances are good this may not be a setback or a lapse but rather a learning moment.

How we label our experiences effects how we view them. When we look at them as negative, we lose the opportunity to learn and grow from them.

Circling back to my original pet peeve, to tell someone they’re stuck with OCD risks keeping them stuck with OCD. I’ve always found it helpful to remember that OCD is also a process. In the obsessive compulsive process, you experience an unwanted, unpleasant thought, memory, urge or sensation that we call the obsession. You then engage in a compulsion to try and get rid of it. If that process impairs your functioning and you spend large chunks of your day engaging in compulsions to get rid of your anxiety, you get the OCD diagnosis.

Good treatment, such as exposure and response prevention therapy, gives someone a different framework — a different process — by which to respond to their obsessions and not engage in compulsions. OCD is fed by engaging in compulsions (be them mental or overt). We do ERP to create as much new learning as possible around uncertainty, distress, fear and doubt. You learn that you can tolerate the discomfort because feelings eventually pass. You learn what actually happens when you don’t engage in a compulsion.

So what constitutes an OCD setback or relapse?

The answer lies in “how long?” and “how often?” Both represent that the person has started engaging in compulsions to get rid of, neutralize or resist their internal experiences. A setback tends to be more brief and less symptomatic than a relapse.

Both are normal parts of the recovery process. We’ll want to approach ourselves with self-compassion and be aware of any negative self-talk. Experiencing setbacks or relapses does not mean you’re broken or that you’ll never recover. It doesn’t mean therapy is a waste or that you’re back at square one. All of those judgments are examples of “meaning making.” We want to notice when we start to attach meanings to a very normal part of the journey. Step back from the meaning making and look at everything as an opportunity to learn.

It might help you to know that there is science behind how we change our behavior. Called the Transtheoretical Model of Change, it says there are 5 stages of change:

We don’t often go through these stages in order, but what’s important to understand is that change often doesn’t last when we don’t follow a process.

Their model accounts for setbacks and relapses — because, again, they’re normal and part of the process. When we relapse, we can re-enter the change process at any point, but we don’t want to skip over, for example, the contemplation stage. Going straight into the action stage doesn’t work. Click here to read more about the science behind how to change.

Change is not easy. This is when working with a therapist really helps. Contact me with questions or to set up an appointment.