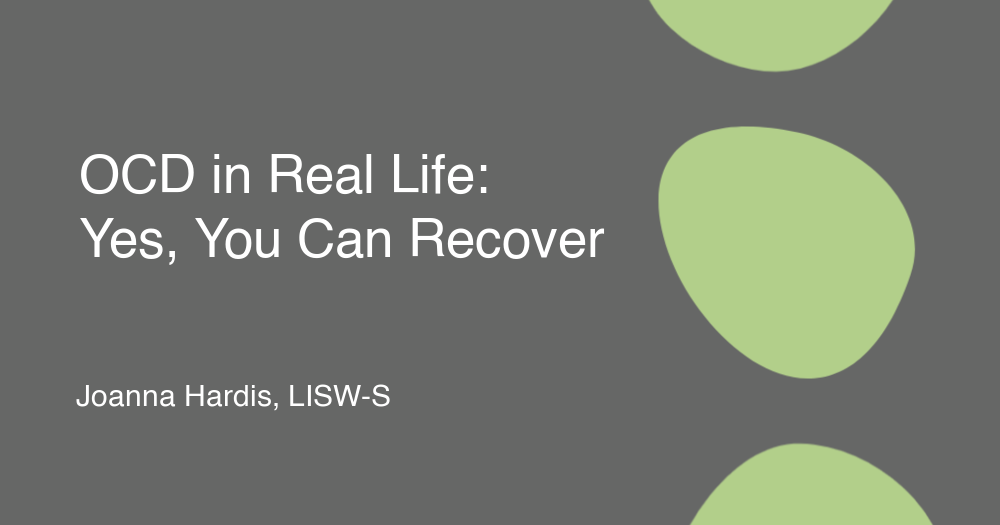 For OCD Week, I posted some real-life stories of people with obsessive compulsive disorder who’ve experienced recovery. They’re my clients, and each has worked with me using exposure and response prevention (ERP). ERP is the gold-standard treatment for OCD and, more often than not,  it works. But it’s in the recovery stories where you really understand its impact.

Jane struggled with a debilitating fear that she could get sick from the germs and bacteria in the bathroom. She would engage in rituals to try and reduce her chances of getting sick, but those rituals gradually multiplied until they were taking hours and making it hard for her to leave the house. As her rules around her rituals grew, family activities were impacted because everything started revolving around her compulsions so she could feel ok(ish).

She performed ritual after ritual in a desperate attempt to feel better.

Today, after 8 months of ERP, she’s stopped all rituals associated with the bathroom and accepts the uncertainty of getting sick. And, during the course of treatment, she’s gotten Covid, stomach bugs and several colds! She’s learned she can be sick without engaging in rituals to make it better too. Her family has enjoyed more time at Cedar Point, spontaneous adventures and flexibility in their schedule AND she uses the public restroom wherever she goes.

Joe (not his real name) turned a 10-minute commute into a 90-minute one because he was looping, mirror checking and driving under the speed limit out of fear he might hit someone and not know it. He’d get to work late, arrive home late and miss dinner plans. He had to plan his mornings and evenings around his rituals.

Six months later, he’s able to drive to and from work, windows down, music up —and even occasionally speed! The thoughts still pop up, but he’s able to keep going.

A first-time mom, Jen (not her real name) was terrified of being alone with her newborn because she was scared she’d “snap.” She felt she’d harm her baby whom she loved more than anything. So ashamed and disgusted about these thoughts, she thought she should die. When she told her doctor, they threatened to put her in the psychiatric ward.

Seven months later, she’s practicing being the mom she wants to be while she feels whatever feelings she feels. And she’s found a psychiatrist who understands OCD.

If you’re in Ohio, reach out. If you’re outside of Ohio, I recommend looking for trained clinicians on the International OCD Foundation website. When checking with your health insurance for clinicians, make sure they’re trained in exposure and response prevention.